Added 1 year ago by
23 Views
Six weeks after the Coupe's launch, attention turns to the Porsche 911 Cabriolet. The open-top 911 continues in a decades-long tradition, established when Porsche unveiled the prototype of the first 911 Cabriolet at the International Motor Show (IAA) in Frankfurt in September 1981: customers and fans alike were instantly captivated. The first open-top 911 variant rolled off the production line in 1982, and it has been a constant feature in the model range ever since. The open version of the 911, which marks the start in 2019 of an unprecedented product fireworks display, has all the innovations of the coupe. One of the Cabriolet-specific advanced features is the new hydraulic system which get the roof opened and closed more quickly.

The new model echoes the modern lines of the Coupe, though it remains unmistakably a Porsche 911 in Cabriolet form. The fully-automatic soft top has an integrated glass rear window, while the soft top structure contains magnesium surface elements known as bows, which reliably prevent ballooning of the roof at high speeds. The soft top can be opened or closed at speeds up to 50 km/h. New roof hydraulics reduce opening time to around twelve seconds, while an electrically extendable wind deflector ensures that necks are shielded from wind impact.

The Porsche 911 Cabriolet is initially available as a Carrera S with rear-wheel drive and Carrera 4S with all-wheel drive. Both rely on a 2,981 cm³ charged six-cylinder boxer engine with 331 kW (450 PS) at 6,500 rpm and 530 Nm torque between 2,300 and 5,000 rpm. The drive efficiency has been increased and emissions reduced by way of an improved injection process; other optimisation measures have also been implemented, such as a new layout for the turbochargers and charge air cooling system. The power is delivered by a newly developed eight-speed dual-clutch transmission. The Carrera S accelerates from zero to 100 km/h in 3.9 seconds (with optional Sport Chrono Package: 3.7 seconds) and can reach speeds up to 306 km/h. The Carrera 4S attains a top speed of 304 km/h and achieves 0-100 km/h in 3.8 seconds (with optional Sport Chrono Package: 3.6 seconds). 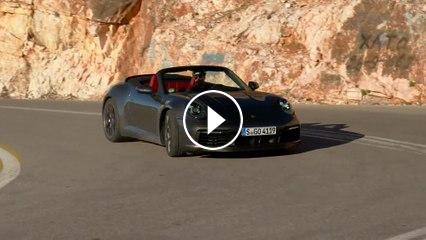 Six weeks after the Coupe's launch, attention turns to the Porsche 911 Cabriolet. The open-top 911 continues in a decades-long tradition, established ...