Top 10 Most Expensive and Rare LAMBORGHINI all of time

Price 1 million US dollars.
Only 2 total examples of the Diablo GT1 were produced.
In 1996, Automobili Lamborghini S.P.A contacted SAT in France to design and build a race version of the Diablo to be able to compete in the GT championships,
much like the Porsche GT1 from 1997.
Powering the Diablo GT1 is Lamborghini’s naturally aspirated V-12, bumped up to 655 horsepower.
The car accelerates from 0–62 mph in 3.0 seconds and a top speed of 217 mph.

Price 1.37 million US dollars.
The Lamborghini Reventón is a mid-engine sports car that debuted at the 2007 Frankfurt Motor Show.
Only 20 total examples of the Reventón were produced, with one additional car produced for the Lamborghini museum.
The engine is the same taken from the Murciélago 6.5 liter V12 now upgraded to 650 PS.
The car accelerates from 0 to 60 mph in 3.4 seconds and a maximum speed of 221 mph.

Price 1.9 million US dollars.
Only 40 total examples of the Centenario were produced (20 coupes and 20 roadsters)
The Centenario was unveiled at the 2016 Geneva Motor Show to commemorate the 100th birthday of the company's founder, Ferruccio Lamborghini.
Powering the Centenario is Lamborghini’s naturally aspirated V-12, bumped up to 759 horsepower and 509 lb-ft of torque.
The car accelerates from 0–62 mph in 2.8 seconds, 0–186 mph in 23.5 seconds and has a top speed of 217 mph.

Price 2.8 million US dollars.
There is only one of them, no prototypes and no others for the Lamborghini Museum.
Lamborghini unveiled the Aventador J to the world at the 2012 Geneva Motor Show.
Just like the standard Aventador, the one-off J version has been powered by a 6.5-liter V12 engine that is capable of delivering a total of 700 HP.
Lamborghini has decided to drop the top speed from 217 to 186 mph to keep those safety standards at a high quality.

Price 2.95 million US dollars.
Only 20 total examples of the Sesto Elemento were produced.
The Lamborghini Sesto Elemento is a high-performance limited edition lightweight track-only car, which debuted at the 2010 Paris Motor Show.
The Sesto Elemento is equipped with a 6-speed semi-automatic transmission and an all-wheel-drive system mated to a 5.2-liter V10 engine.
Lamborghini claims a 0–62 mph acceleration time of 2.5 seconds, 0–124 mph time of 8.0 seconds, and a top speed of 221 mph.

Price 3.6 million US dollars.
Production of the Sian will be limited to 63 units.
The Lamborghini Sian FKP 37 is a mid-engine hybrid sports car that debu

Top 10 Most Expensive and Rare LAMBORGHINI all of time 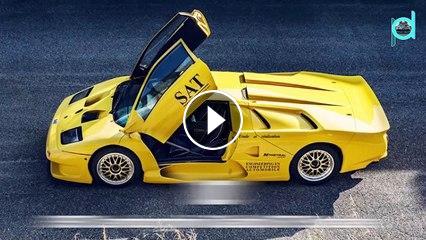