Top 10 Most EXPENSIVE and RAREST BUGATTI all of time

2. 2019 Bugatti La Voiture Noire
Price 18.7 million US dollars.
The La Voiture Noire is a one-off special introduced at the 2019 Geneva Motor Show.
The car features six exhaust pipes recalling the innovative design of the past.

#3. 2015 Bugatti Atlantic concept
This concept should have been revealed at the 2015 Pebble Beach show but was pulled out at the last minute due to Dieselgate.
The layout is completely different from the two hypercars Bugatti is known for and much closer to the 1937 Type 57 Atlantic.

#4. 2008 Bugatti Veyron Barchetta
The concept is named "2015 Veyron Barchetta" and was developed starting in 2008 using the Veyron Grand Sport as its basis.
The idea with the Barchetta is to have a super-limited edition model for the richest car collectors in the world, a bit like what Lamborghini does.

#5. 2020 Bugatti Centodieci
Price 9 million US dollars.
Only 10 units of the Centodieci will be produced.
The car is an homage to the Bugatti EB110 and a celebration of the Bugatti marque's 110th birthday.
The Centodieci accelerates from 0 to 62 mph in just 2.4 seconds and a top speed of 250 mph.

#6. 2019 Bugatti Divo.
Price: 5.8 million US dollars.
The production of the Divo is limited to 40 units.
The car is named after French racing driver Albert Divo, who raced for Bugatti in the 1920s winning the Targa Florio race twice.
Bugatti claims the Divo will accelerate to 62 mph in just 2.4 seconds and a top speed of 236 mph.

#8. 2019 Bugatti Chiron Sport '110 Ans' Edition
Estimated price: 4.1 million US dollars.
Introduced in February 2019, the 110 Ans Bugatti is a limited edition variant of the Chiron Sport developed to celebrate 110 years of Bugatti.
Production will be limited to 20 units.

#9. 2019 Bugatti Chiron Super Sport 300+
Price 3.9 million US dollars.
On August 2, 2019, Bugatti presented a limited-production high-performance variant of the Chiron called the Chiron Super Sport 300+.
The car accelerates from 0 to 60 mph in 2.4 seconds and a top speed of 304 mph.
The variant is limited to 30 examples and closely resembles the prototype performing the top speed record run.

Top 10 Most EXPENSIVE and RAREST BUGATTI all of time 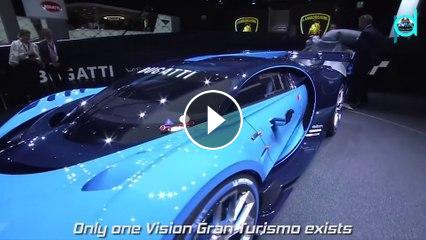